the state and with

where the initial and final times are fixed (

) and the boundaries are fixed to

. Define the pseudo-Hamiltonian depending on

(normal case). The application of the Pontryagin Maximum Principle (PMP) tells us that the minimizing trajectories

are the projection of absolutely continuous extremals

the maximized (or true) Hamiltonian, where the optimal control is

and where the Hamiltonian system is given by

, we define in a neighborhood of

(if possible), the following exponential mapping

satisfying the Hamiltonian system for every

are the projection of BC-extremals, i.e. extremals which satisfy the boundary conditions, and we can define the following shooting function:

is the canonical q-projection, i.e.

This is done by Newton type methods. A zero of the simple shooting function satisfies the necessary conditions of optimality given by the PMP.

as an independent variable. With HamPath, it is possible to solve

for instance, using differential path following methods. In this case, we say that

is a homotopic parameter.

ceases to be optimal after the time

is a critical point of the mapping

a conjugate time and

the associated conjugate point. Let give the following definition.

is called a Jacobi equation, or variational system, along the extremal

of the Jacobi equation along

is called a Jacobi field and we write

As a conclusion, it comes that if

is a conjugate time then

is not of full rank

At the bottom of the following figure, the part below the doted lines is a fragment of the outputs of HamPath which is in the language chosen during the installation: it may be chosen among Fortran, Python, Matlab (only) or both Matlab and Octave. AD stands for Automatic Differentiation, RK for Runge-Kutta integrators used to solve ordinary differential equations, Newton for Newton-type methods to solve non-linear equations and QR for QR factorization. 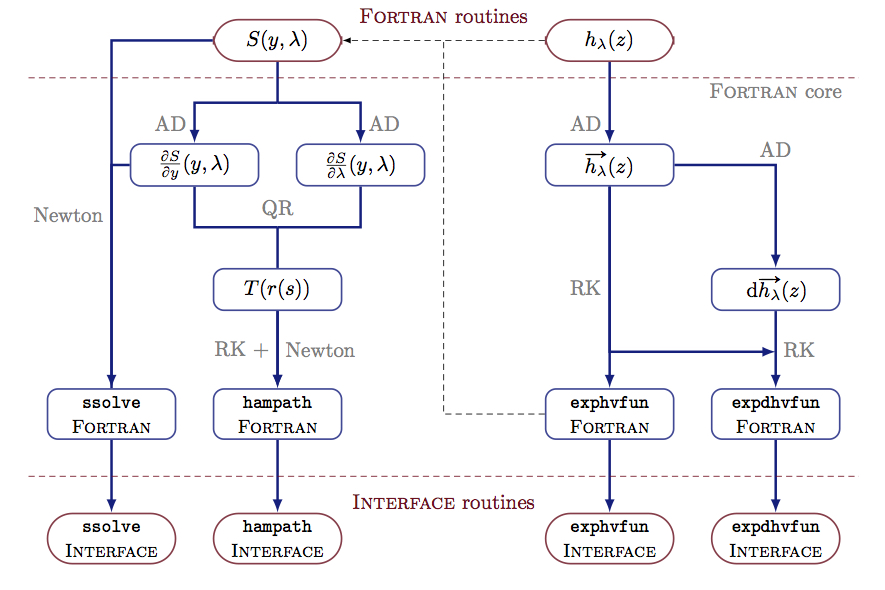